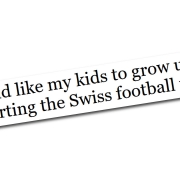 The Wild Geese were Irish expatriates who served as professional soldiers with the Catholic powers of Europe, from the late 17th to the early 20th centuries. There’s a Wikipedia article on the topic that includes this amusing quote from one Diego Brochero de Anaya, writing to the Spanish King Philip III:

…that every year Your Highness should order to recruit in Ireland some Irish soldiers, who are people tough and strong, and nor the cold weather or bad food could kill them easily as they would with the Spanish, as in their island, which is much colder than this one, they are almost naked, they sleep on the floor and eat oats bread, meat and water, without drinking any wine.

(Both the diet and sleeping conditions have improved in Ireland since then and wine has become quite popular too, although the climate remains, in general, colder than Spain.)

The term the Wild Geese is also the title of a weekly series in the newspaper The Irish Times, where they feature an Irish person who is living and working overseas. The idea is to profile them, talking a bit about their route to their current role and place, as well as the work environment and opportunities in their adopted country. Last March, when a song I wrote made a bit of a splash on social media in the region and beyond, I was contacted about doing an interview, which I was more than happy to do.

It was a good experience: I enjoyed the interview and was happy with how it turned out. I’ve been teased (by Irish friends) about the headline they chose to run on the piece but I think Joanne Hunt did a nice job of capturing my career path and the broad strokes of my life here in Switzerland: ‘I would like my kids to grow up supporting the Swiss football team’.

As it happens, my first cousin Fionnuala, who has lived in Seattle for many years, was interviewed for the same slot, appearing in the newspaper just last Friday. Small country, big world!