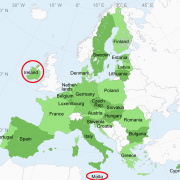 As of this month, Ireland has become the most populous English-speaking country in the European Union. Its population of 5 million is about ten times that of the other anglophone country, Malta*. Of course there are EU member states that are home to more people who speak English – apparently 15 million speak the language in the Netherlands, for example – but Ireland has, in a way, now become the standard-bearer for English in the EU.

I grew up speaking Hiberno-English, the version or dialect of English used in Ireland. I often find myself chatting with non-Irish friends and colleagues here in Switzerland about some of the peculiarities of Irish English. And, living away from Ireland for more than 15 years now, my own use of the language has changed as I have spent more time around people who may not immediately understand the way I might instinctively say or write something.

A brilliant article by a writer and editor called Stan Carey, published in the Irish Times** last month, goes into detail on many of these linguistic quirks that are part of day-to-day discourse in Ireland. If you’re interested in this topic, I strongly recommend you jump straight to that article now, as the rest of this post consists of a few examples I’ve picked from it. (It’s around 3,000 words, so you may want to save it for later.)

The Irishism I mention most often when asked about this topic is, I now know, called the “after-perfect”. An Irish friend might ask you “What are you after doing?“; or you might call home to say “I’m after missing the bus!“. These are very typical sentence constructions in Ireland, but can be the source of much confusion elsewhere. As the article says:

“One study asked Irish English and British English speakers the meaning of the line I’m after getting a cup of tea. Nearly all the Irish understood it as “just got a cup”; most of the British interpreted it as a wish for tea.”

The after-perfect is an example of a construction that arose from applying the way something would be said in the Irish language to English. To again quote the article, “Since Irish lacks a verb for have, a literal translation of the perfect tense (“I have eaten”) was not possible, so we transposed Irish phrases like tar éis and i ndiaidh to form “I’m after eating”.”

He refers to Loreto Todd’s book Green English: she says that when Irish language speakers in the 17th century began to communicate more with English speakers, there emerged “a form of English that reflected Irish influence at every linguistic level” – sound, syntax, rhythm, idiom, vocabulary.

Another Irishism I like is “amn’t”. It’s not a word I use today, but used it often as a child. As Stan Carey points out, it’s actually more logical than the form we’re taught to use in school, “aren’t”, as the intention is usually to say “I am not”; hence “I amn’t”!

He also highlights the way in Ireland we use “ye” for the second person plural: Are ye coming or what?. Again, this was just an ordinary part of speech for me growing up in Ireland, although today I use it more selectively. As the article points out, it’s not limited to that single word either:

“An array of ye and youse forms are so established in Irish English that we inflect and affix them in every imaginable way: yeers, yeez’d, youse’ll, yehs’ve, yizzer.”

As a final example, we can look at adjectives. It’s another topic I’ve discussed before with friends: the creativity that goes into choosing and using adjectives. Of course this happens in most other dialects too, but I feel like the Irish have made a fine art of this.

Come to think of it, several of those terms might come in useful when discussing the chain of events that led to Ireland becoming the leading anglophone country in the EU. But sure that’s a whole other story!

*It’s noteworthy that both Malta and Ireland have their own second official language that predates the use of English, although Wikipedia suggests that Maltese is much more widely used than Irish, relatively speaking.

**Actually, the Irish Times article is an abridged version of a longer text published in a magazine called The Stinging Fly. The author’s website is at stancarey.com.