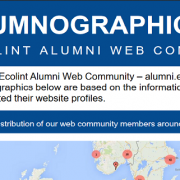 As social media have become the predominant channel for spreading information and ideas, infographics (which have been around for a long, long time) have become hugely popular for organizations of all kinds. As tools for promotion, advocacy, awareness-raising or marketing they can convey information much more efficiently than blocks of text or tables of figures.

Working at the International School of Geneva’s Alumni Office, I realized the membership database represented a wealth of information that, properly presented, could help us to raise the profile of the alumni community, both around the school’s three campuses and, online, with the alumni themselves.

Our first “Alumnographic”  provided a graphical snapshot of the alumni community worldwide, where they lived, what they did, when they graduated, etc. The graphs were produced with MS Excel, using pivot tables to explore the data and generating suitable graphs. The infographic itself was compiled in PowerPoint, importing the graphs from Excel and with maps generated using easymapmaker.com. The 2015 edition drew on additional data gathered during the previous year, using word clouds to illustrate the community’s most popular choices for further education and volunteer activities.

For the best infographics its of course advisable to work with a skilled designer and professional software. (The designer at Ecolint helps me to polish many of the graphics that I produce. Merci Francis!) But when resources are limited, it’s possible to achieve an effective result using software available on a standard PC. Both in print as a poster and online via the website and social channels, the Alumnographic served well its purpose of generating additional interest in our activities.

(Another, much simpler, infographic that had an impact earlier this year – again both as a physical poster and online – was this short lesson in Latin grammar. I’ve noticed members of the school community making an extra effort to use the appropriate term since we published this.)

Renaming an association magazine to bring it to a wider audience

In hindsight, it looks like a master plan
Scroll to top